Georgian-Sparrow linguistic relations originate from the depths of centuries. In Georgian we have both old and middle and modern Persian borrowings. A great deal of research has been conducted by Georgian linguists to identify them. The materials recorded by Shushana Putkaradze provide very interesting material for linguists in this regard.

Shushana Putkaradze did a great job, on the instructions of Arnold Chikobava Institute of Linguistics, to record the speech patterns of Georgians, or Muhajirs, who were deported in the Republic of Turkey in 1828-29 and 1877-78.

Niko Mari first became interested in the Georgian language of the Muhajirs in 1904, and almost a century later Shushana Putkaradze, with the mentioned two volumes, made a very interesting gift to Kartvelology.

Our attention is drawn to the rather large dictionary attached to the first volume, which is full of Eastern, namely Turkish, Arabic, Persian, and Arabic-Persian vocabularies, all of which, except Turkish, have origins, but there are also Persian lexical items which have no origin. , these are:

Some of the separate lexical items in the dictionary (Amkhanaki Karfuzi, Dasturi ...) have not been left out of the attention of Georgian Iranians, but some will first come to the attention of interested parties (Datamiz, Dukorda, Jakhandari ...), or - different phonetic Is presented in the form (Mohiri, Lukhud, Desgah ...).

Persian borrowings are established in Chveneburebi Georgian with some phonetic and semantic changes. Part of it is entered in Georgian through Persian, and part through Turkish. Some of them have even acquired a new semantic load. Persian polysemy is mostly mono semantic. 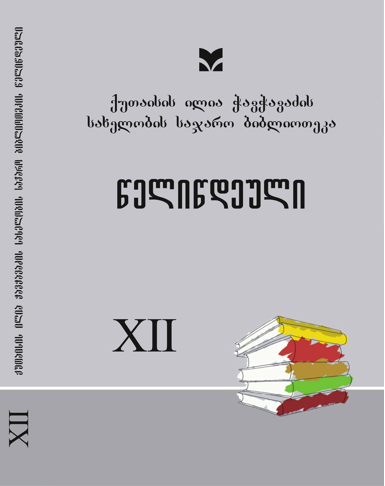